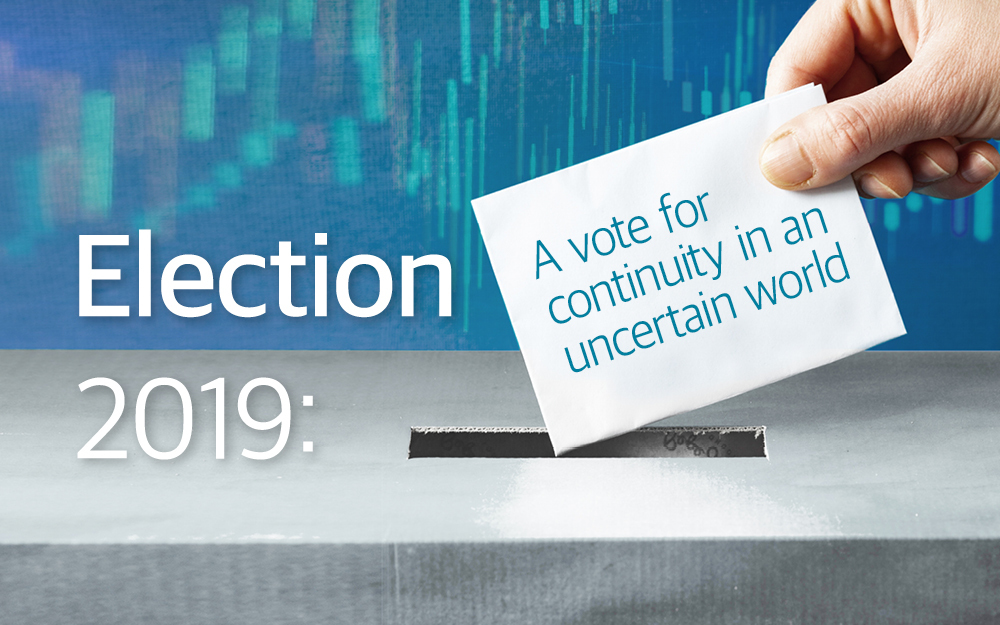 A vote for continuity in an uncertain world

The Liberal/National Party Coalition has been returned to government, as Australians chose continuity over change and cautious economic management over Labor’s ambitious reform agenda.

Although Prime Minister Scott Morrison’s election spending promises were more modest than Labor’s, they will still deliver economic stimulus in the form of personal tax cuts and other initiatives. This is to be welcomed at a time when the local economy is slowing and facing challenges from global trade tensions.

The Coalition is promising sweeping tax cuts for individuals and continuity for investors with no big changes to existing investment or superannuation policies.

One of the first items of business for the government will be to reconvene Parliament to pass legislation on a low and middle-income tax offset which could flow to Australians on incomes of up to $126,000 from July 1 this year. As Labor supports the offset the legislation should enjoy a smooth passage through Parliament.

Individuals to pay less tax
Providing the legislation is passed quickly, from 1 July Australians earning less than $37,000 will receive a tax offset of up to $255 (effectively a cash rebate) with their tax returns. If you earn between $48,000 and $90,000 you will get the maximum amount of $1080. The offset then scales down to zero for anyone with a taxable income of $126,000.i You can estimate the amount you will receive here.

Further planned tax cuts could depend on the Coalition winning the next federal election.

From January 2020 the proposed first Home Loan Deposit Scheme would allow eligible first home buyers with income of up to $125,000 (or $200,000 for a couple) to buy a home with a deposit as low as five per cent without incurring lenders mortgage insurance.ii

The government estimates buyers could save up to $10,000 in lenders mortgage insurance.

Help for small business
Small business has not been forgotten. As announced in the recent Budget, the popular instant asset write-off will be increased and extended to businesses with turnover of up to $50 million (previously $10 million).

Eligible businesses will be able to write off assets up to the value of $30,000 (previously $25,000) against their taxable income.

Investment tax concessions to stay
Investors can breathe easy now that controversial changes to dividend franking credits and negative gearing proposed by Labor will not go ahead.

Individuals, including those with a self-managed super fund, will continue to be entitled to a cash refund of franking credits attached to their share dividends if the franking credits exceed their tax liability.

Property investors have also earned a reprieve, with no changes to negative gearing rules. In addition, the 50 per cent capital gains tax discount that applies to investment assets held by an individual for at least 12 months will also be preserved under the Coalition. Labor planned to halve the discount.

Super changes at the margins
Australians hoping to boost their super in the run up to retirement will continue to enjoy existing tax concessions.

You will still be able to make catch-up concessional (pre-tax) contributions if you meet certain conditions. From the 2019-20 financial year, individuals who have not used their full $25,000 annual concessional contributions cap will be able to carry forward the shortfall for up to five years and claim a personal tax deduction for the catch-up amount. To be eligible, your total super balance must be below $500,000 on June 30 the previous financial year.iii

In addition, the non-concessional (after tax) contributions cap will remain at $100,000 a year for people with a total super balance below $1.6 million. Those under 65 can still bring forward up to three years’ contributions (or up to $300,000) with a proposal to increase the age limit to 67 from 1 July 2020.iv

The Coalition also plans to allow older Australians to make voluntary contributions until age 67 without meeting the work test. Subject to legislation, this measure would also begin on 1 July 2020.

Looking ahead
With the election out of the way, Australians can get back to the business of planning their finances with more certainty.

The initial response from financial markets was positive, with the Aussie dollar and local shares both up on the first day of trading after the election. However, the jury is still out on whether the Government’s tax cuts and spending promises will be enough to boost economic momentum. If the softer economic conditions continue, the Reserve Bank may cut rates to provide more stimulus.

If you would like to discuss your overall financial plan in the light of the election result, please give us a call.